Devised and choreographed by Nicky Scott
Directed by Robert McWhir 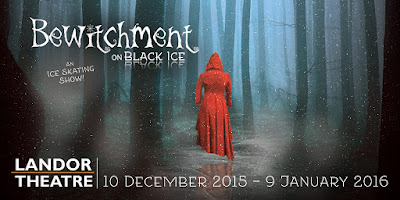 Skating more on thin ice than black, this year's Christmas offering from the Landor is, to be honest, more bewilderment than Bewitchment. But if stars were to be awarded solely for ballsy bravura then Robert McWhir's take on this fairy tale pot-pourri would be a 5-star Fantasia.

Staged on artificial ice, there is much to smile at in this sometimes saucy tilt at witches, princes and Disney princesses. If there's a story running through Bewitchment, it was lost on me - but the entertainment kept on coming.

Leading the energetic Clapham cast is South London's ice-skating queen and now a national coach, Paulette Smart, as Malevolent. An accomplished performer on the ice, Smart's dance is a treat, even more so for an off West End "above a pub" production. Turns out skating is in the family, for Smart is more than matched by real-life daughter Tara whose Cinderella on skates is a stunner. Smart Junior's movement is lithe and lissome and a second half dance two-hander comprising mother and daughter is sensational.

Bewitchment’s writing is a curious affair. Far too crude to be called a family show - although its ingenious, even if low-budget, special effects (I loved the fish) cry out for kids' approval. And with gags as old as they are occasionally very offensive (referring to a black girl as a chocolate fondue? Really??) there is often more to wince at than guffaw. The pre-recorded soundtrack is clunky - and with un-mic'd actors competing with amplified backing, lyric loss is inevitable (though Ruth Petersen's Belle, reworking Alan Menken into "little town, full of Village People" was a gem).

Some of Nicky Scott's ensemble dance work is impressive - Ryan Ford Iosco's Prince Charming and Chantelle A’ Court’s Snow White in particular. But ice dance ain't easy - and all too often there's a lack of synchronicity amidst the hard-working company that smacks of an overambitious creative team. And don't ask why, but towards the end of the show, Jeff Raggett's Rumpelstiltskin comes back from the dead with a take on the Bricusse/Newley classic Feeling Good that is as powerfully sung as it is just downright bizarre!

To its credit Bewitchment only lasts 1hr 45 (inc interval) and it's not often that ice dance comes to a Clapham pub. The Smart girls are a fabulous pair - and seeing them, up close and in action, is worth the price of a ticket.