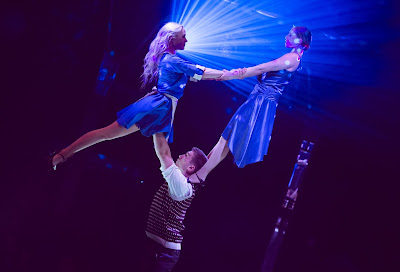 After a dramatic Friday of tears and fears, agony and ecstasy and the resignation of a prime minister, a late-night cabaret of debauched unreality at the Hotel Black Cat proved to be quite the perfect antidote.

From the mesmerising burlesque artistry of Venus Butterfly and the almost balletic athleticism of sublime acrobats Nathan and Isis to the decadent gluttony of pig-faced fire-eater Chrisalys, this was 75 minutes of unexpected delights, all camply presided over by compere Dusty Limits.

Indeed, the bitchy Mr Limits turns out to be an Aussie of limitless talents - a singer-songwriter with a three-and-a-half octave voice that's capable of doing full justice to Sondheim and Porter when not being the manager of the once-elegant but now rapidly fading Black Cat.

The show presents the hotel as having become a haven for artistes many of whom have seen better days, notably the chambermaid and dogsbody Katharine Arnold, whose career has been wrecked by drugs and drink. It is badly in need of financial assistance and Dusty sets to work on two rich clients, played by Nathan and Isis.

It's a flimsy enough storyline but under Laura Corcoran's direction it's just strong enough to bind together a fine array of speciality acts. On they come in turn, from juggler Florian Brooks to ladders clown Dimitri Hatton to ballet whores Cabaret Rouge and into what was one of the three highlights of the evening, Mr and Mrs Butterfly's lovely daughter with her neon-lit, gracefully swirling Night Flowers dance.

Other golden moments came via the stylish acrobats and a clever musical comedy routine from the appropriately-named Bowjangles, a quartet playing various strings, dancing up a storm, singing lustily and making us laugh all at the same time, quite a feat.

There's a second helping of Nathan and Isis in a ménage a trois story involving Katherine Arnold, now transformed from skivvy to star acrobat on a giant hoop, the show ending with the Eagles’ pulsating 'Hotel California'.

Two songs by the multi-gifted compere stood out - '20th Century Blues' and 'Time' - in a rich fruitcake of all that's best in this particular form of cabaret. The show almost offers a soupçon of a throwback to 1880s Montmartre and Le Chat Noir, where artistes would perform in front of Paris’ great and good in return for free drinks and the chance to get noticed.

It would have been an even better evening if Dimitri had not tried TOO hard to be funny (some loved his clowning; I was not amused) and the audience had been supplied with a list of performers and their backgrounds. Another niggle was having to form a long queue beforehand, for a show that was to begin 15 minutes late, quite a worry for those catching a last train home.

That said, this Cat is out of the bag for the next nine Fridays at the Spiegeltent on a buzzy and vibrant South Bank and well worth a visit. Yes, it's a bit rude at times and there's the odd four-letter word but nothing I couldn't take my maiden aunt to if I still had one. It's surprising what maiden aunts have got up to in their time!