Music and lyrics by Stephen Schwartz
Book by John Caird 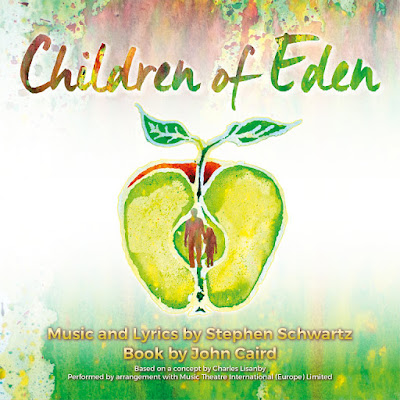 Directed by Christian Durham, this production of Children of Eden marks the show’s 25th anniversary. It is also only the second production to be staged in Southwark’s newly built and re-located Union Theatre.

John Caird's script for the show is based on the Old Testament’s Book of Genesis and goes from Creation with Adam, Eve, Cain and Abel in act one through to Noah and The Flood in act two. The dialogue is minimal, involving a lot of characters in prayer - frequently overhead to the spotlights.

Notwithstanding the minimalism, the stories’ themes of hatred, forgiveness, love and death, all stemming from familiar biblical tales are immense and demand a certain gravitas from the lead characters. Unfortunately, for the most part, gravitas is the missing element in this production.

As Father, or the “God” character, Joey Dexter feels too young for the role, lacking the authority and charisma that the part desperately needs. Unfortunately Dexter is not helped by the over amplified electric piano which swamped the majority of his vocals. As with the new Union’s recent production of The Fix, the cast here are un-mic’d and poor sound balance seems to be emerging as a recurrent issue. Producers take note: the acoustic intimacy of the old Union didn’t need mics, but it looks like the new space does.

The young cast of eleven are enthusiastic, charming and unquestionably, hardworking, with their sheer energy in Generations, the second act opening number, proving infectious. The evening’s highlight is Natasha O'Brien, newly arrived on British shores from Canada and one to watch in the future: her committed performance as both Eve and Mama Noah was eye-catching, exuding warmth and openness. O'Brien has an impressive, natural singing voice, showcased to particular effect in Ain't It Good and she seems to enjoy singing the uplifting gospel anthem as much as the audience enjoyed hearing it.

Lucie Pankhurst devises some clever choreography, with bodies continually moving to evoke settings and props. Her work is perfect for the piece and incorporating her cast to become an elongated snake for Gabriel Mokake's serpent’s song In The Pursuit of Excellence is terrific.

When the whole cast sing in unison, the sound is quite lovely but it is the individual voices that lack confidence. Schwartz's songs, even if not up there amongst his best compositions such as Wicked and Pippin, still beg for strong voices to fill the phrases and soar with the melodies. Unfortunately here they don't and with big subject matter - God, Creation etc - more experienced performers would have made the piece more coherent.

The relevance of Children of Eden in 2016 is debatable and this production feels slightly old fashioned where it could perhaps have been infused with an element of danger. Any theatrical experience requires the audience to believe another reality and in this show, for two and a half hours. The Union's production manages to suspend our disbelief fleetingly but not enough to convert an audience to this particular religious musical.

Runs until 10th September
Reviewed by Andie Bee
Posted by Jonathan Baz at 20:15