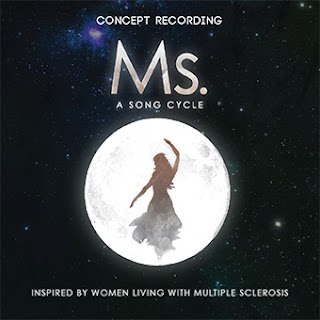 An album themed around the impact of a disease makes for an unusual release at the best of times and yet there is an unexpected noble beauty to Rory Sherman's MS. A Song Cycle. As Sherman writes in his CD sleeve notes, most of the people diagnosed with Multiple Sclerosis (MS) are women, often in their 20s or 30s whose lives are at best, rearranged and at worst, devastated. Drawn from his own conversations with friends and family, Sherman has written a collection 14 songs, each one set to music by a different composer, and each recorded by a different woman drawn from amongst the cream of Britain's musical theatre performers.

Whilst all of the recordings are as humbling as they are beautifully crafted, a number are particularly profound, moving or even dammit downright entertaining. Robert J. Sherman (he of the illustrious songwriting line of Shermans and no relation to Rory) has scored the reflective Mondays, recorded by Rosemary Ashe. There's an innate sense of wisdom in Ashe's timbre, singing of the therapy found in a weekly group meeting - with Sherman's gentle melodies only enhancing the song's message.

What's That Jim? scored by George Stiles and sung by Caroline Quentin has a music-hall ring to its take on a woman's frustration at her condition, with a clever fusion of wit and irony in  Quentin’s delivery. Likewise the satire in Mummy's Not Well sung by Lauren Samuels with music by Paul Boyd is another bittersweet gem. The song tells of a child's perspective on her mother's diagnosis, the lyrics bringing a clever poignancy - naive, yet knowing.

Laura Pitt-Pulford's Cerulean Skies (penned by the talented Sarah Travis, more often to be found directing other people's music rather than composing her own) offers a deeply personal message from a mother contemplating her own decline in health as she addresses her child.

One of the most heartbreaking perspectives on the album comes from Caroline Sheen's Tortoise & Hare (composer Gianni Onori) - sung by a woman who sees her partner physically speeding up in comparison to her own battle with MS, that is leaving her impaired and slow. It's perceptive, painful songwriting, powerfully performed.

And that last sentence is actually an apt description for the entire album. This review has highlighted those that tracks I found left the deepest personal impression and the key word there is “personal”. There's a bevy of other songs from other talented performers and creatives, each of whose contribution may strike each listener differently. They all deserve credit so: Also appearing on the album are Alexia Khadime, Lillie Flynne, Anna Francolini, Jodie Jacobs, Siubhan Harrison, Josefina Gabrielle, Preeya Kalidas, Janie Dee and Julie Atherton. Additional compositions come from George Maguire, Brian Lowdermilk, Erin Murray Quinlan, Verity Quade, Amy Bowie, Luke Di Somma, Tamar Broadbent, Robbie White and Eamonn O'Dwyer.

And on nearly all of the tracks, Ellie Verkerk puts in sterling work on the piano.

No personal gain is being made from the album, with profits going to The MS Society. All the artists involved have donated their time and talent, with Richard O'Brien providing the cash to get the CD released. As such, this review can only be a loving appraisal - to critique would be invidious - as would be to award anything less than 5 stars. MS. A Song Cycle is beautifully performed. Buy it!
Posted by Jonathan Baz at 22:58