Ray Gelato and his Giants - Review 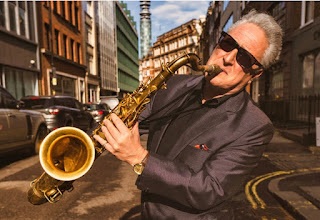 A packed Dean Street Pizza Express enjoyed Ray Gelato and his Giants perform a two-hour set that criss-crossed the Atlantic with its content in a glorious celebration of the power of music to entertain. An old-school bandleader, Gelato led from the front switching effortlessly between vocals and sax throughout the gig with his six fellow musicians (three on wind, a bass, piano-player and drums) delivering classy support.

The energy fizzed from the moment Gelato opened proceedings with a speeded up When You’re Smiling. Up tempo and uplifting, feet tapped and faces grinned as the band delivered immaculately rehearsed takes on American Songbook classics that ranged from Louis Jourdan to the Rat Pack. Memorable moments from the evening included Gelato’s saxophone take on Sinatra’s Angel Eyes and his outstanding lead in Boulevard of Broken Dreams. Elsewhere, drummer Ed Richardson’s sensational three-minute (!) riff in Nat King Cole’s L-O-V-E had to be seen to be believed.

A witty songwriter himself, it was a joy to hear Gelato’s self-penned gems Bar Italia and My Last Meatball played live - maybe next time he’ll treat us to some gangsta with Who Stole Ronnie’s Pickle?

This is London music as it should be. On for two more sold-out evenings, but well worth trying for returns.