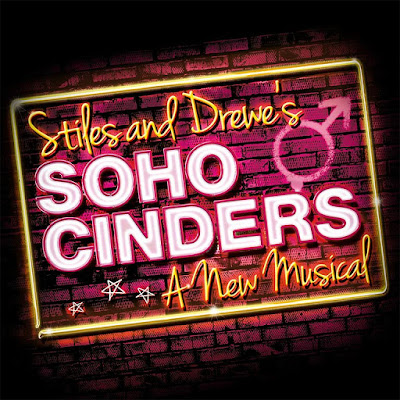 Shifting London's Old Compton Street south of the river, the run up to Xmas sees the Union present Stiles & Drewe's newish Soho Cinders, their Cinderella for the 21st Century, as a festive offering.

Elliot Davis co-writes the book with Drewe and together they offer a bold attempt at re-defining the classic fairy tale. Cinderella is now Robbie, a young gay boy who as the story unfolds, finds himself unwittingly caught in a Keith Vaz style sleazy maelstrom between James Prince (geddit?) the handsome London Mayoral candidate who loves him (and who Robbie loves in return) and Chris Coleman's dastardly Tory, Lord Bellingham. Matters are made worse by Prince also being engaged to Marilyn, his sweetheart from university days and if things weren't bad enough for the County Hall hopeful, his devious campaign manager William (great work from Samuel Haughton) is a bit of a bastard too.

Throw in Robbie's best friend Velcro, along with Clodagh and Dana, his gloriously horrible step-sisters and it all begins to get rather confusing. The Fix, which played recently at The Union, sent up the politics shtick far more convincingly. For all its noble intentions, this musical melee of modern day metro-sexuality is perhaps just a little too tangled

That being said.... the strengths of this production lie in the marvellous work that Will Keith has coaxed from his company. Lewis Asquith is every inch the confused and handsome Prince, torn between his emotional commitment to Lorri Walton's (beautifully voiced) Marilyn and his burning desire for Robbie. Asquith nails his character's moral turmoil, delivering a vocal presence that comfortably rises above Sarah Morrison's well balanced 3-piece band. While Prince’s character may have been originally written as a caricature, Asquith's perfectly weighted nuance imbues it with a carefully crafted complexity.

Joshua Lewindon captures Robbie's vulnerability, portraying a young man who's just on the right side of straying into a world of vice. Vocally however Lewindon needs to do more - he's great on the big numbers, but needs to sing the softer stuff stronger if it is to be fully appreciated above the music.

As Velcro, Emily Deamer sings powerfully, with Wishing For The Normal being one of Stiles & Drewe's more enchanting ballads of recent years. Deamer is the essence of feisty sensitivity and she tackles an unconventional character with a classy style.

Natalie Harman and Michaela Stern as Dana and Clodagh are without question the evening's guilty pleasure. Costumed in the cheapest leopard skin getups and with their commanding presence and immaculate comic timing, they are a contemporary definition of pantomime's ugly sisters. They're also given the evening's funniest numbers I'm So Over Men and Fifteen Minutes, with their magnificent soprano voices smashing both songs out of the park.

The Christmas cracker at the heart of this show however is Joanne McShane's stunning choreography. There is clearly a synergy between Keith and McShane for yet again in one of his shows she displays an inspired ingenuity in arranging stunning routines within the space available. Her ensemble work in particular proving evidence of well drilled, imaginative movement.

Much work has gone into the production and it shows. Soho Cinders is a fun night at the theatre - go see it, you won’t be disappointed!

Runs until 22nd December
Posted by Jonathan Baz at 21:55