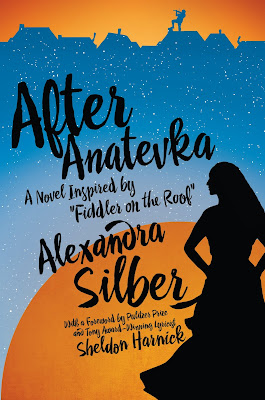 Alexandra Silber’s first novel After Anatevka is a carefully crafted study into love and life in Russia in the early twentieth century. Much like Marc Chagall was to paint enchanted images of that era, so too do Silber's words offer a painstaking picture of a world long since disappeared.

Not just a writer, Silber is amongst the finest musical theatre performers of her generation and on both sides of the Atlantic too. The novel however marks her own remarkable and professional journey which in this instance, and unconventionally, has gone from “stage" to "page”. Read on...

Every now and then an actress can come along who leaves an indelible impression upon a role. Think here perhaps of Imelda Staunton's Momma Rose or Glenn Close’s sensational take on Norma Desmond. Far more intriguing however, is when the role turns out to have left its own indelible handprint on the heart of its performer.

So it was in 2006, when Lindsay Posner chose Silber to play Hodel in what was to be his acclaimed production of Fiddler On The Roof at Sheffield's Crucible Theatre. With Henry Goodman as Tevye the show was a sensation, becoming  swiftly earmarked for a West End transfer, playing at London’s Savoy for nearly two years.

Hodel of course is the second eldest of Tevye and Golde's daughters. When Perchik, the Jewish revolutionary firebrand blazes his way into the shtetl of Anatevka to steal her heart, what emerges is an onstage love story that is as sweet and inspirational as it is heartbreaking. It was 1894 when Sholom Aleichem breathed life into his fictional characters in his series of short shtetl-based yarns, collectively called Tevye The Dairyman. Some 70 years Joseph Stein was to draw on that creation in writing the book for Fiddler (a work that was only to be enhanced by Sheldon Harnick's Tony-winning lyrics). It has taken a further half-century for Silber to add a further thread into Aleichem, Stein and Harnick's golden literary tapestry.

One of the most poignant scenes in musical theatre's canon takes place on the platform of Anatevka's railway station. Some time earlier Perchik, branded as a political criminal by the tsarist regime, had been banished thousands of miles away to Siberia. His brief stay in the shtetl however had been long enough to win Hodel's committed and passionate love.

Hodel realises that she must follow her heart to Siberia, and as the train approaches in the distance, she promises her father that she and Perchik will, one day, be married under a traditional Jewish canopy. Amidst the combined whirlwinds of political revolution, the impending destruction of Anatevka and the dispersal of its inhabitants across the globe, both father and daughter know that they are unlikely to meet again. When Hodel says to Tevye "God alone knows when we shall see each other again", the audience's hearts are broken.

This scene is a manifestation of love at its most raw and pure. The exchange is carefully crafted prose which in the hands of skilled actors (and this scene has rarely come finer than with Silber and Goodman) can be a performance masterclass. Silber and Goodman did indeed break our hearts - but few (if any) in the audiences will have been aware of Silber's own tragedy that she brought to the role. Barely 23 years old at the time, she had borne the pain of losing her own and much loved father to cancer not long before taking on the role. The impassioned, blazing soul that fuelled Silber's performance was unforgettable.

And so, from the novel's background, to the tale of After Anatevka itself. It is a meticulously detailed story that paints a strangely recognisable picture of Russia’s imposing and corrupt hierarchy and the hardships wreaked upon those who offended the State. There are nosings of both Dostoevsky and Pasternak in Silber's work and she paints a picture of violence and violation as the backdrop to Hodel's remarkable quest to reach her betrothed and the life that they were to build amongst the salt mines of the East.

Silber's research has been thorough. Aside from studying archives of the vanished Jewish world of the Pale of Settlement she visited Siberia to understand for herself the detail and character of the region.

And yet, as well as the projecting the characters into their imagined futures, Silber also offers some charmingly imagined back-stories from the world of Anatevka that can only have come from a woman who has well and truly got under the skin of Tevye's daughters. For not only did Silber play Hodel in the UK, but two years ago in New York, when producers were searching for a Tzeitel for Bartlett Sher's (also acclaimed) revival of Fiddler, it was Sheldon Harnick himself who was to call Silber and ask her to re-visit his show, this time playing Tevye’s oldest daughter. Silber of course was again magnificent on stage and as an aside, the bond between Harnick and Silber is clear for the gifted lyricist has penned a sage and heartfelt foreword to the book.

Silber explores how the sisters grew up together. She offers Hodel's wistful perceptions on her older sister's strengths and capabilities, describing their shared childhood and how much their mother imbued in them the strengths and spiritual importance of 'tradition". The paragraphs in which Hodel recalls Golde instructing the girls in how to bake challah (the Jewish plaited loaf eaten on Sabbath) are but one example of the delightful detail with which Silber fleshes out her world.

There's also a fascinating back story to Perchik. Who would have guessed that this inspirationally handsome communist had started life as an accountant? Though while Perchik is surely no Leo Bloom, Silber breathes a fascinating life into his own troubled past

After Anatevka is an impressive published debut. Alexandra Silber offers a profoundly perceptive yet quintessentially female take on a world in which tradition was both revered and challenged. Silber also gives us a stunning study into the power of love.